Should You Use Mouthwash?

Most mouthwash commercials are the same. Someone brushing their teeth in frame is informed via narration that brushing isn’t enough, and is handed a bottle of mouthwash said to kill 99.9% of bad bacteria. If you’ve used mouthwash yourself, you’ve noticed the tingling sensation it produces in your mouth, and after a quick rinse, you might notice some neon-colored floaters that stick to the sink. But obviously these commercials are designed to get you to buy mouthwash, so how do you know whether mouthwash is too good to be true? 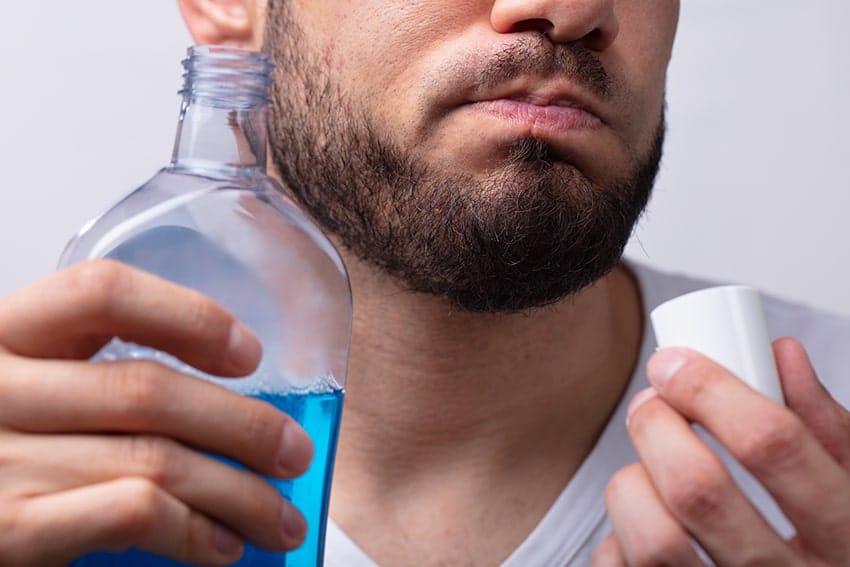 Like most things, mouthwash certainly has its place and time. Since it’s liquid, it can reach into all the nooks and crannies traditional tooth brushing can’t. And, surprise, these places are generally where food and plaque can build up. Mouthwash with fluoride can also, like toothpaste, be effective at neutralizing certain bacteria known to have a role in tooth decay and gum disease, while also helping to remineralize worn enamel.

Although it can be helpful, mouthwash is not the oral health panacea. Like the American Dental Association suggests, brushing twice a day and flossing once a day is still crucial to top-notch oral health. Flossing can help to remove several stubborn food particles from crucial build-up zones like below the gumline.

One of the main claims of mouthwash marketing is that it is a cure for bad breath. As close to half the population of the United States have, at some point, dealt with bad breath, it’s no wonder many flock to it. However, an essential question is whether mouthwash can cure bad breath or just mask it. This answer isn’t an easy one.

While mouthwash can kill certain bacteria associated with bad breath, it may not solve the underlying issue. Much like brushing your tongue, mouthwash can help to neutralize natural odors produced by mucus glands, but if your bad breath is the result of the early stages of gum disease, known as gingivitis, curing that bad breath will take a whole lot more.

And mouthwash can sometimes make bad breath worse. Most mouthwash contains alcohol, which can dry out the mouth. Harmful–and smelly–bacteria can thrive when there is less saliva to suppress it.

Try a Check-Up With Your Mouthwash

Unfortunately, there just hasn’t been a significant amount of research supporting the use of mouthwash. Though it can help to remineralize your teeth while fighting bacteria associated with tooth decay, practices like brushing and flossing have been shown to be more effective. Coupled with brushing and flossing, another practice recommended by the American Dental Association, is receiving checkups and cleanings at least twice a year.

Having your teeth cleaned can help to remove dental plaque that has hardened, and can’t be removed through brushing alone, and it can also ensure that your mouth is in good shape.

Oral complications like gum disease can be scary, as they can significantly increase your chances of stroke, heart disease, and diabetes. But gum disease doesn’t happen overnight. By regularly seeing a dentist, you can make sure gum disease is caught a treated before it becomes advanced.

If you are looking for a dentist in Anchorage who can be a champion for your oral health, please call (907) 349-0022 today for an appointment at Excellence in Dentistry.