Cavities are the most common health epidemic in the US. Approximately 95% of US adults will develop cavities at some point in their lives. The most common treatment for cavities is fillings. In the past, metal amalgam fillings were commonly used, and they did their job. However, they had many shortcomings, which is why we only offer tooth-colored or composite fillings. Not only do they look more attractive, they don’t contain toxic mercury and we are able to preserve much more of your natural tooth structure.

If you are looking for a dentist in Anchorage offering tooth-colored fillings or want to remove your existing metal fillings, please call (907) 349-0022 or Contact us today for an appointment at Excellence In Dentistry.

Metal amalgam fillings have dominated the industry for more than 150 years, largely because we didn’t have alternative treatments. Since their introduction, tooth-colored or composite fillings have rapidly grown in popularity because of their many benefits. These benefits include:

Tooth-colored fillings are typically known for their natural appearance. When properly placed and polished, tooth-colored fillings will blend in seamlessly with your teeth. No one needs, or will, know that you have had fillings placed. Metal amalgam fillings start out as highly visible silver and over time can oxidize (rust) and turn almost black. These blackened fillings don’t just affect the appearance of the restoration, they can actually discolor your teeth/and gums. When they darken your gums this is referred to as an amalgam tattoo.

Tooth colored fillings can also be made much smaller. It is not necessary to remove as much of your natural tooth material to place a tooth-colored filling because of the way the material is attached to your tooth – mechanical retention (amalgam) vs. chemical bonding (composite). Natural tooth material is irreplaceable so it is always best to preserve as much of it as possible if you can.

Metal amalgam fillings aren’t actually attached to your teeth. Rather, the material is pushed in the hole drilled into your tooth and held in place by pressure. However, if the pressure decreases, liquid and bacteria can seep in around the filling, leading to erosion and decay around the filling. Tooth-colored fillings are actually bonded to your teeth, and create a tight seal, so liquids and bacteria are kept out.

Keeping liquids out helps tooth-colored fillings keep your teeth insulated so you’re less sensitive to hot and cold liquids. And because they’re not metal, they won’t conduct the heat into your tooth as much as metal amalgam fillings. Also, because they don’t bond to your tooth, they can actually weaken your tooth because they create a place where fractures can begin. Tooth-colored or composite fillings don’t often lead to as much weakening, due in part because you retain more of your natural teeth and also because they are made of ceramic which can actually strengthen your teeth.

What Are Tooth-Colored Fillings?

Ceramic fillings are made of advanced ceramics that combine both beauty and strength. These can be more than ten times as strong as your natural tooth and can be even more durable than amalgam fillings. The only disadvantages are that they are more expensive than composite fillings and take two visits to place. At the first visit, your tooth will be prepared and an impression taken. The impression is sent to a dental lab where your filling, also called an inlay or onlay, is made. Approximately three weeks later, your filling is ready and you will ll have a second appointment to place it.

If you are looking for either kind of tooth-colored filling in Anchorage, please call (907) 349-0022 or Contact us today for an appointment at Excellence In Dentistry. 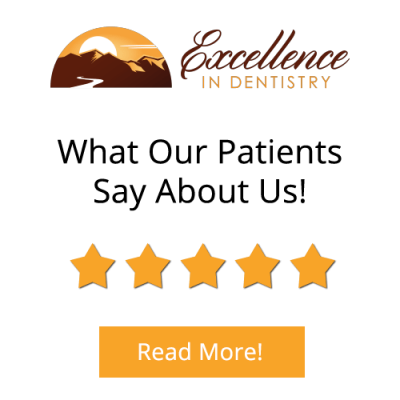